Descriptions and Rankings of Poker Hands

Doug Draper Posted on July 16, 2015 Posted in Fun No Comments 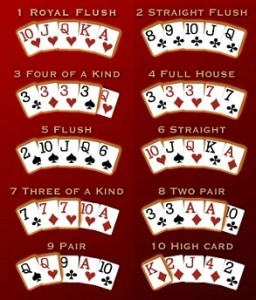 Poker hands are described and ranked from the strongest at the top and weakest at the bottom.

Five of a Kind

A five of a kind (which is only possible when using wild cards) is the highest possible hand. If more than one hand has five of a kind, the higher card wins (Five Aces beats five kings, which beat five queens, and so on).

Four of a Kind

A flush is a hand where all of the cards are the same suit, such as J-8-5-3-2, all of spades. When flushes tie, follow the rules for High Card.

Three of a Kind

Three cards of any rank, matched with two cards that are not a pair (otherwise it would be a Full House. Again, highest three of a kind wins. If both are the same rank, then the compare High Cards.

This is any hand which doesn’t qualify as any one of the above hands. If nobody has a pair or better, then the highest card wins. If multiple people tie for the highest card, they look at the second highest, then the third highest etc. High card is also used to break ties when the high hands both have the same type of hand (pair, flush, straight, etc).